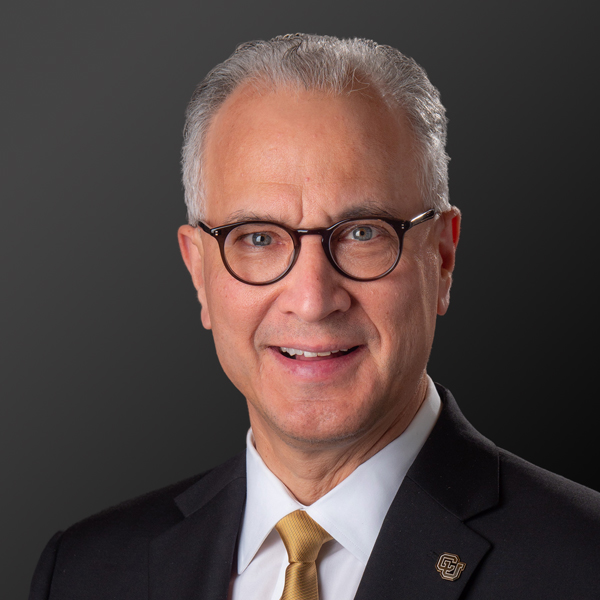 Mark Kennedy was named 23rd president of the University of Colorado on May 2, 2019, and officially started leading the CU system July 1, 2019. He oversees a university system with four campuses (Boulder, Colorado Springs, Denver and the Anschutz Medical Campus), more than 67,000 students, 37,000 employees and a $4.8 billion annual budget.

Before assuming the presidency of CU, Kennedy distinguished himself in successful roles in business, government and higher education.

Kennedy firmly believes in the power of a public research university such as CU to improve lives and have a positive impact at home and around the globe. A first-generation college graduate from a family of modest means but a strong belief in the power of education, Kennedy is a staunch advocate for increasing first-generation college graduates while providing educational opportunities for all. He serves on the Fitzsimons Redevelopment Authority board and the University of Colorado Hospital Authority board.

Kennedy came to CU from the University of North Dakota, where he served as president from July 2016-June 2019.

During his time at UND, Kennedy led the adoption and implementation of a strategic plan that positioned the university for success in a fast-changing higher education environment. UND increased graduation rates by 10 percentage points under his leadership. The university also expanded research and online offerings, underwent significant campus renewal and was listed among the 25 Most Innovative Universities by U.S. News & World Report.

From 2001 to 2007, Kennedy served in the U.S. House of Representatives, first for Minnesota’s Second Congressional District and then for its Sixth Congressional District. While in Congress, he sat on the Agriculture, Financial Services and Transportation committees, where he established a reputation for bipartisanship. After leaving Congress, Kennedy was appointed to the Advisory Committee on Trade Policy and Negotiations, serving under both Presidents George Bush and Barack Obama.

Before his time in government and higher education, Kennedy had a successful career in business, including helping Pillsbury buy and expand Häagen-Dazs and serving as an executive on the leadership teams of the company that is today known as Macy’s. Kennedy also served as the Global Retail Business Development Lead for Accenture, a global management consulting and technology firm.

Kennedy is the founder of the Economic Club of Minnesota and a member of the Council on Foreign Relations. He founded the Frontiers of Freedom Lecture Series at St. John’s University and authored Shapeholders: Business Success in the Age of Activism, published by Columbia University Press.

He earned a bachelor’s degree from St. John’s University and a master’s in business administration (MBA) with distinction from the University of Michigan.

Kennedy and his wife, Debbie, have four children and six grandchildren.