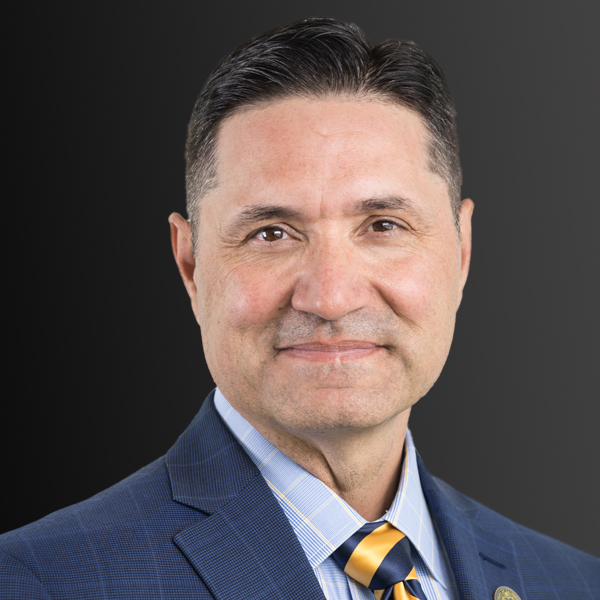 A Los Angeles native whose parents immigrated from Mexico, Dr. Juan Sánchez Muñoz has deep roots in the UC system and California.

He earned his bachelor’s in psychology from UC Santa Barbara. Prior to earning his M.A. in Mexican-American studies from Cal State LA, Dr. Muñoz served in the Marine Corps during the 1990-91 Gulf Crisis, finishing his time as a sergeant.

He was a secondary school teacher, an instructor in the California Community College system, and an adjunct faculty member at Pacific Oaks and Whittier Colleges prior to earning his Ph.D. in education at UCLA.

He joined the faculty at Cal State Fullerton and served on the board of directors of several nonprofit agencies, was appointed to the Los Angeles Workforce Investment Board-Youth Council and served on both the Parks & Recreation and Substance Abuse Commissions in San Bernardino County.

Dr. Munoz served as senior vice president for institutional diversity, equity and community engagement, and vice provost for undergraduate education and student affairs, at Texas Tech. He was most recently president of the University of Houston Downtown where, within his first year, he launched the university’s largest capital campaign and also led the institution’s recovery efforts after Hurricane Harvey.

Dr. Muñoz sits on the boards of the Hispanic Association of Colleges and Universities and the American Council on Education.

He is married to Dr. Zenaida Aguirre-Muñoz, an associate professor at the University of Houston. They have three sons: Joaquin Diego Muñoz, who attends the U.S. Merchant Marine Academy; Cruz Santos Muñoz, a freshman at Texas State University San Marcos; and Juan Amado Muñoz, who will be attending high school — and playing baseball — here in Merced.